Dear Peng Yu and Sun Yuan, Drew Hammond (Lao Han) was so kind to inform you about the essentials of the exhibition MAXIMUM SELF part 1 here in Berlin to which I would like to invite you.

part 1 (april, 2013)
intends to show the  work of a minimum of 5 contemporary chinese artists who you choose and whose work deals with “the self” in different ways that open private, political, historical, sexual, psychological, philosophical or formal connotations . all works should fit in one suitcase which is sent to me. I’ll organize the rest.

there is complete freedom about the media you choose.

part 2 (september, 2013)
shows the work of at least 10 internationally known berlin based artists who will work with the same basic guidelines that are:

the title and the response (if they choose to do so…) to the works you sent along in the suitcase.

Matthias Held invited the artists to choose four or five artists whose work could be shipped to Berlin in a single suitcase. There were no restrictions on whether the works shipped would be objects or instructions for installations to be reconstituted in Berlin. Initial email correspondence on the idea elicited a numbers of potential themes as follow:

Even though this is not meant to refer to Duchamp’s Boîte-en-valise, a few of the ideas of the latter potentially are implicit in the operation, e.g. portability of the object(s) vs. portability of the idea (in which the portability of an object as a conveyance of the idea imposes a surrealistic tension of materiality); the portable art work as a metonym for the artist’s identity (this additionally a satire of the consumerist tenet of identification of the self with the objects one owns); the question of what constitutes a unique piece—especially if that which arrives in the suitcase is wholly or in part, the plans for a reconstruction, reconstitution, or re-enactment of a work; the question of geographical situation as aesthetic constitutor and its potential for variability. Distinct from Duchamp, there is the potential implication of reverse colonization consistent with anxiety of the West vis a’ vis “the rise of the rest;” the desire of Chinese artists for Western exposure and its cultural,market, and political implications.

1) Diffusion of Authorial Identity (The Matchbox)

We recall that for Sun Yuan & Peng Yu, to sign their work as a duo, the act of joint authorship, resides in tension with the traditional idea of the work of art as the product of an individual creative subjectivity regardless of any assistants in its fabrication or execution.

The matchbox in the suitcase refers to The Matchbox Project of 2006 by the Australian twins, Leanne and Naomi Shedlezki who provided empty matchboxes, invited artists of one city at a time to place works of art inside them, and return the finished works to the twins, who, in turn, inserted the matchboxes into a case in order that “they all come together as one portrait.”

This twins project poses an extension of Sun Yuan & Peng Yu’s idea of the diffusion of authorial identity to a nearly infinite fragmentation of authorship that is related to spatial fragmentation. This idea is also related to identity insofar as we identify ourselves with geographic states.

The Tokyo artist, Tsuyoshi Ozawa, has been making portable miniature exhibition spaces from milk boxes since the 90’s. The blue box contained in the suitcase is one such space, that along with the matchbox and the suitcase itself, compels not only a reappraisal of conventions of the scale of exhibition spaces and the art object, but as part of an ensemble in the suitcase, generates a “Chinese box” that implies a spatially infinite regress that itself implies a tension with its small scale.

Most known for his “vegetable weapons” a series of photos of women holding assemblages of vegetables in the shape of firearms, Ozawa shares with Sun Yuan & Peng Yu an underlying belief in art as a benign “weapon” of change.

3) The Presence and the Absence of the Bodhisattva of Mercy

The golden container in the suitcase bears Chinese and Sanskrit names of the the Buddhist Bodhisattva of Mercy, the subject so much of Asian painting and sculpture for centuries. Here the image of the Bodhisattva is absent, a fact that on the one hand, allows one to imagine that mercy so often is absent except as an imaginary figment; and on the other hand asserts one of the most fundamental tenets of conceptual art, that the most essential feature of a work is its idea rather than its formal aspect.

According to the Lotus Sutra, the Bodhisattva (Guan Yin) can be male, female, or genderless “since the ultimate reality is in emptiness.”

The Chinese name on the empty miniature picture frames in the suitcase be literally be translated as “Little Hans,” here a reference to Hans Ulrich Obrist. The viewer may imagine that frames are those which the curator’s presence fills with artistic identities that can efface the identities of the artists whose works are used as illustrations of curators’ ideas. Obrist’s most well-known ongoing efforts, The Interview Project, The Conversation Project, the Do It Series of 1997, the Interview Marathon of 2006, The Manifesto Marathon of 2008, the Poetry Marathon of 2009, the genericization of the creative act and the consequent homogenization of the artistic identity as interchangeable and disposable objects of consumption. 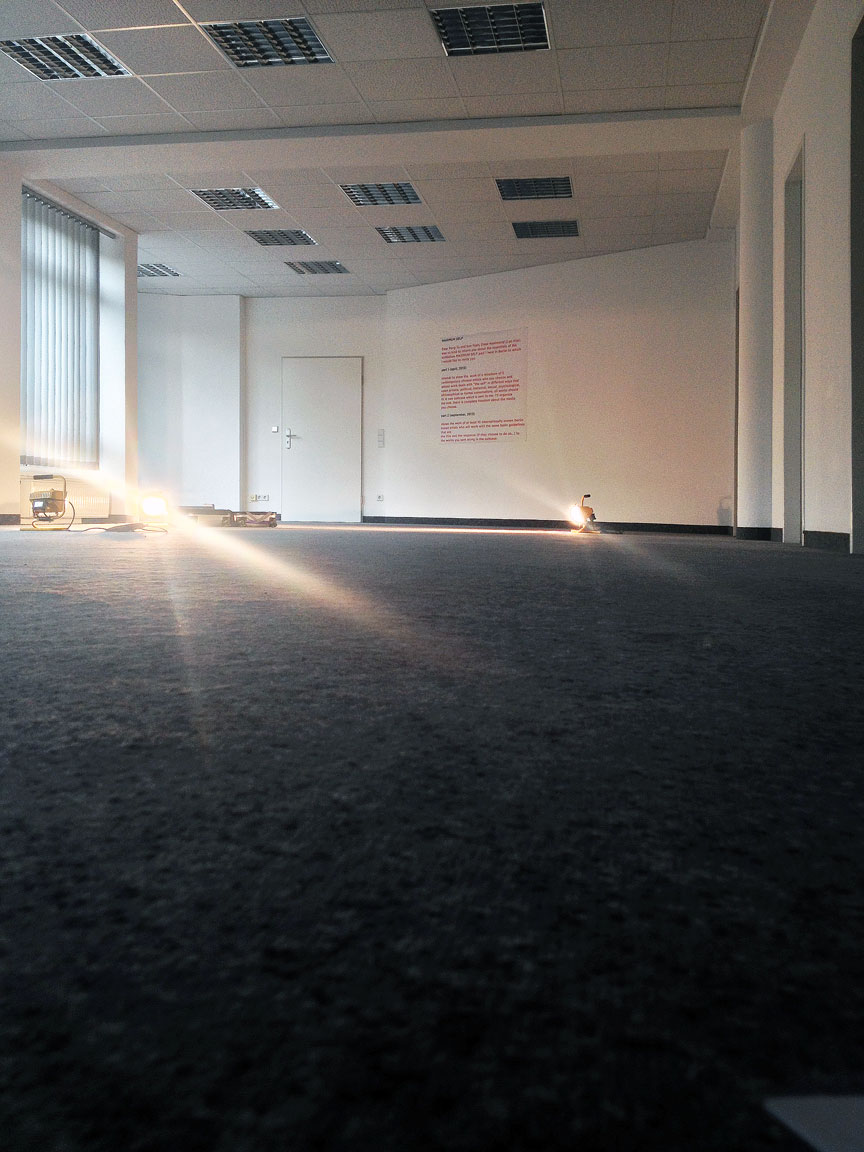 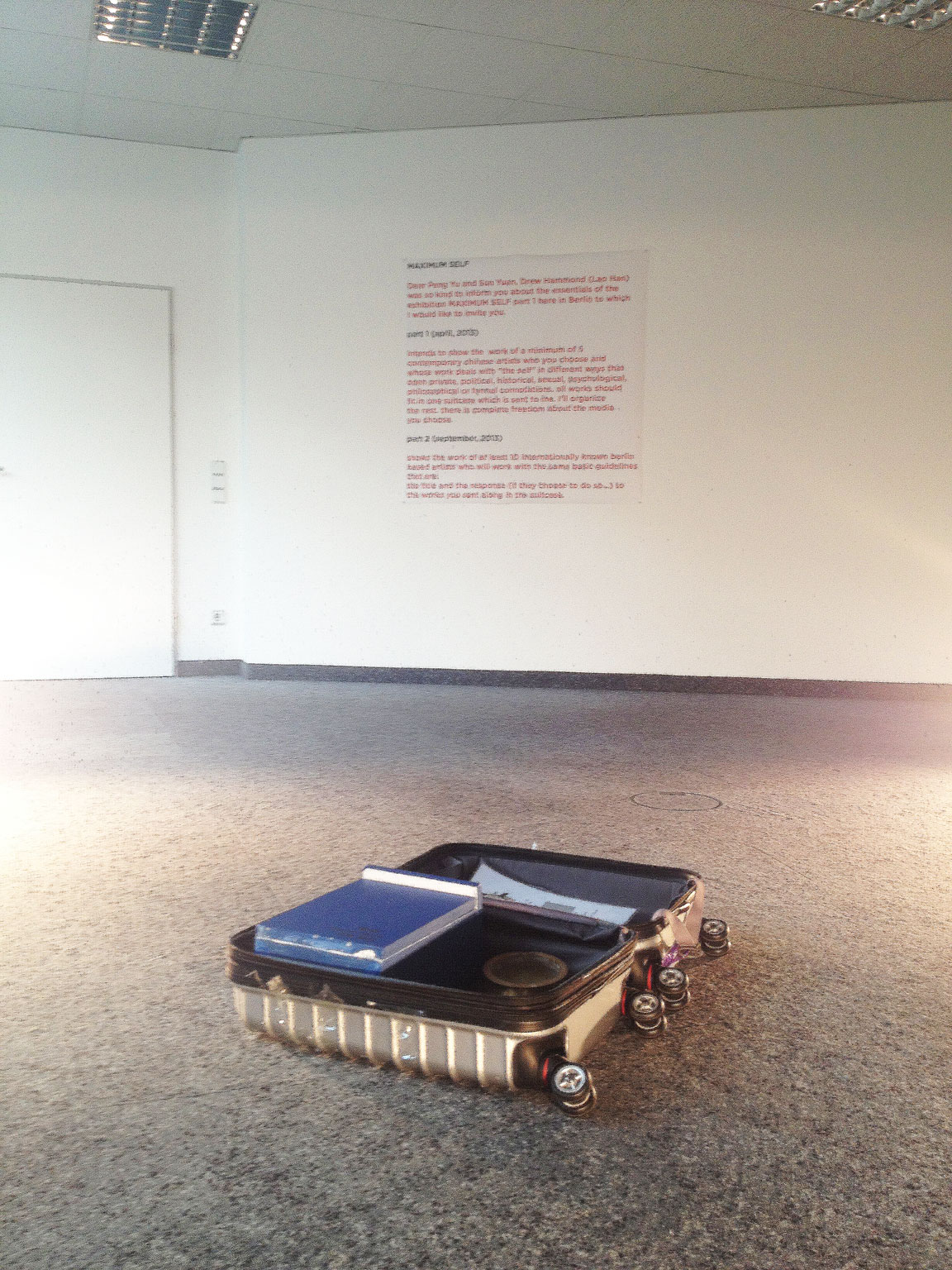 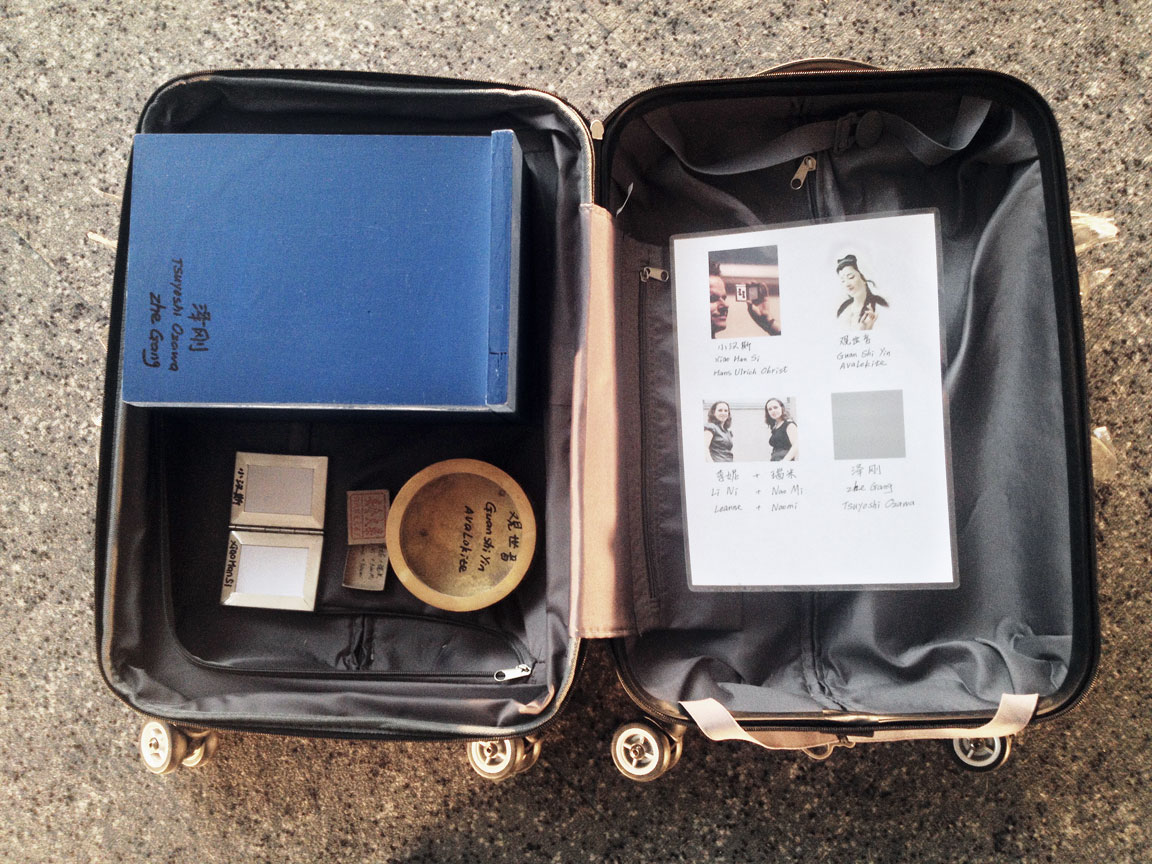 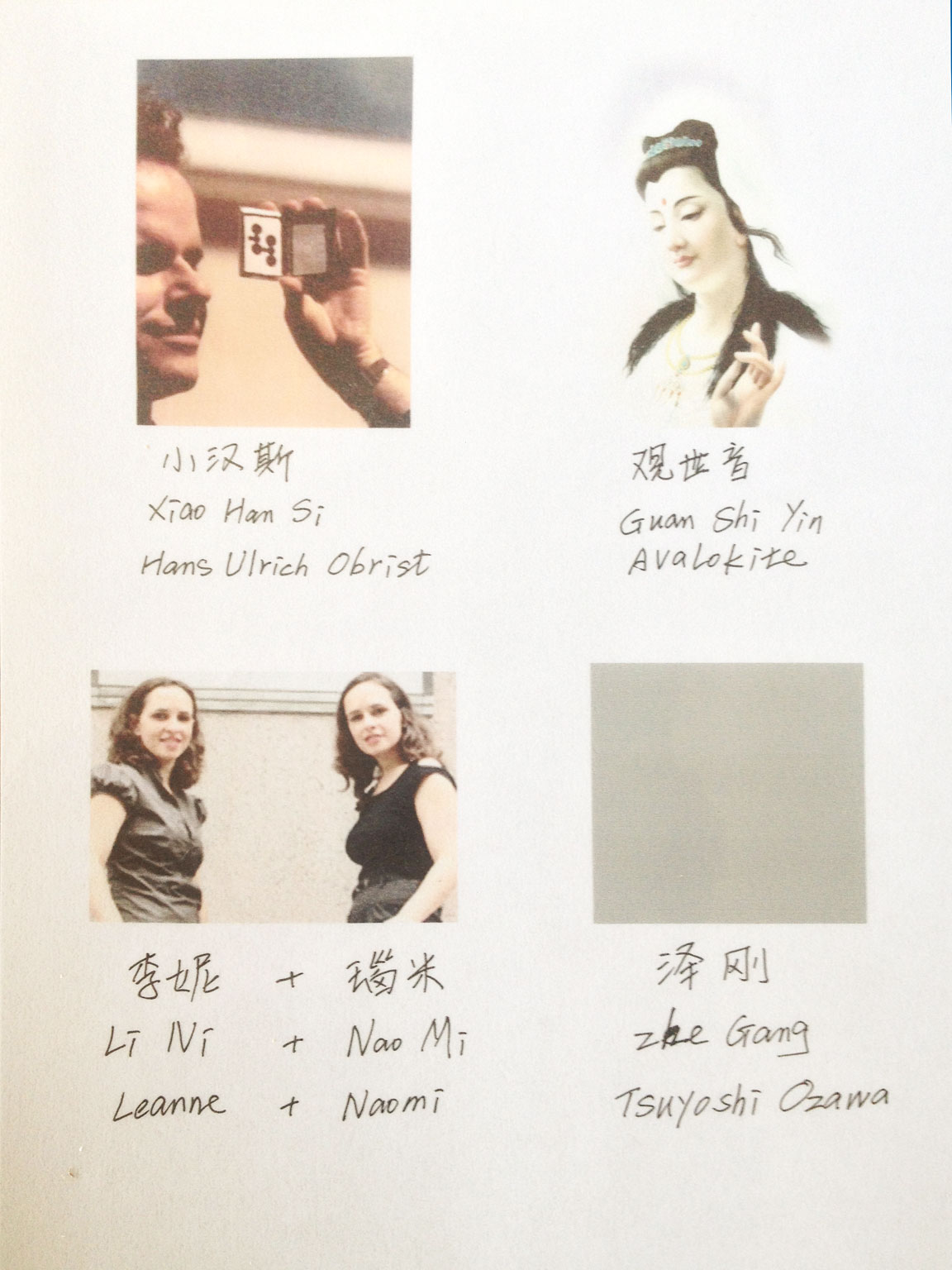 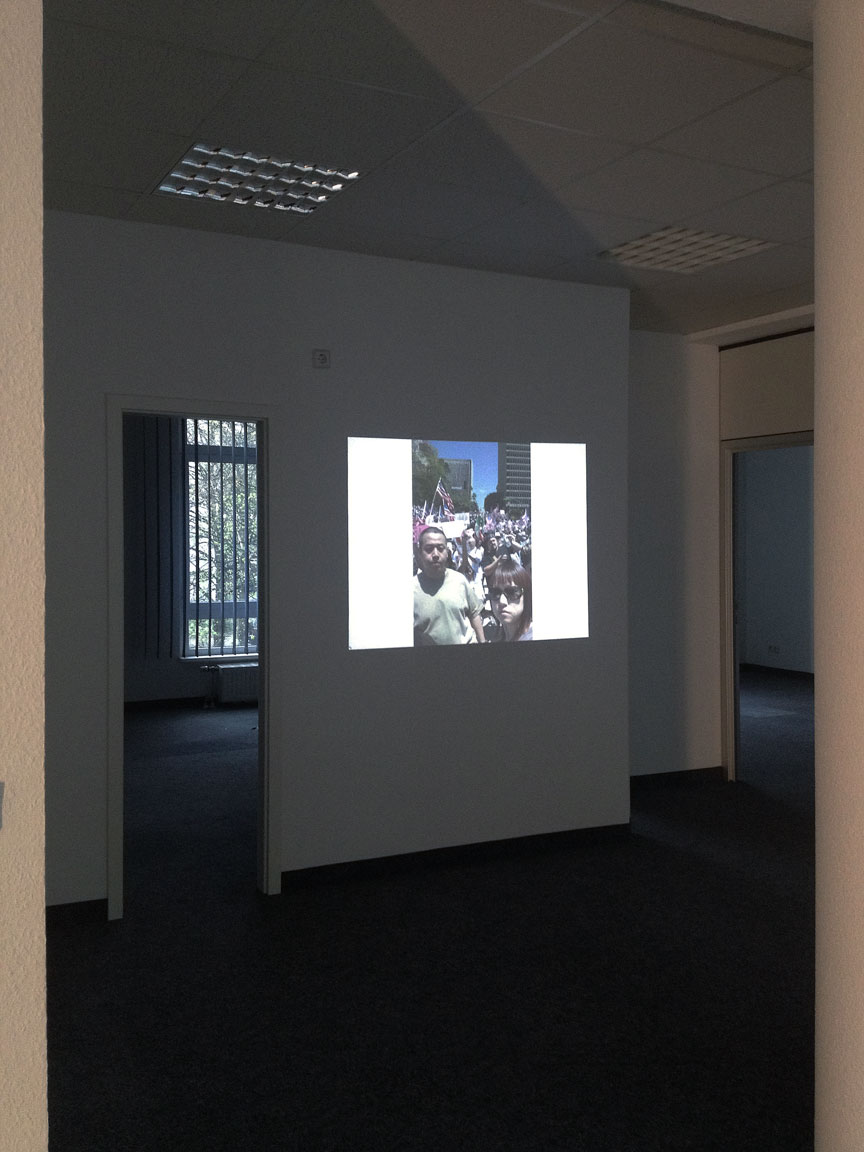 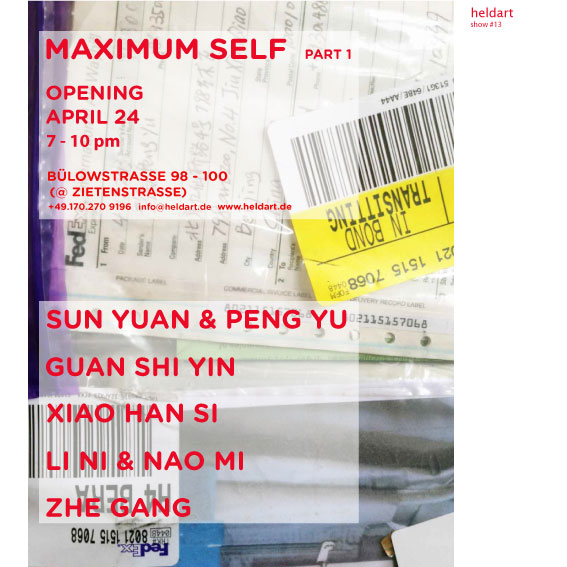