Language is the dress of thought (Samuel Johnson) Lets start with a quote from the most-cited English intellectual: Samuel Johnson (1709-1784). Famous for his Dictionary of the English Language of 1755, Johnson not only was the first scientifically to archive English, but he also included the language of Shakespeare, Milton, and Francis Bacon. In this sense, his lexicon was revolutionary not only for its inclusion of literary language in general, but in particular for that of Shakespeare who was not at all accepted by the elite because he ignored such formal structures as the unity of location and time. These same elites were also ill at ease with Shakespeare’s furious mix of tragedy and comedy, a paradox that was anathema to the 18th century ideology of language as the decoration of thought. Nowadays, the styles of our speech are supposed to indicate our ways of thinking despite the fact that they are also a costume, a disguise of thought. So let’s get naked for sincerity’s sake—not just in the way of Hans Christian Andersen in The Emperor’s New Clothes.
But there is a relation to Andersen’s story in the sense that something really is there, though it were invisible. Reality follows up too quickly in form of a child pointing out the obvious: the king is naked. Of course, the child is oblivious of the fact that the imagination around his majesty’s nakedness is killed by the factual profanity of the child’s words. It is even more about a point from Wittgenstein: Man has the ability to construct languages capable of expressing every sense, without having any idea how each word has meaning or what its meaning is…Language disguises thought. So much so, that from the outward form of the clothing [the “dress of thought”] it is impossible to infer the thought beneath it, because the outward form of the clothing is not designed to reveal the form of the body, but for entirely different purposes”.  (Wittgenstein: Tractatus Logico-Philosophicus 1921, 1922).
This exhibition is not to defend or question the fact that the emperor is more innocent than the child by not talking but acting.  Neither is it to illustrate an idea of Wittgenstein’s, nor to state that language is not the 18th century idea of the decoration of thought. Instead, it juxtaposes several ideas: the idea of language in comics and art, the idea of visuals, the idea of dressing and nakedness, gender and eros, female and male domination, hero and loser. In Language and the Mind (1968), Chomsky writes: “The normal use of language is a creative act, is innovative, in fact, infinite in its variety”. This statement resonates with the situationist idea of language used in comics, especially in underground comics of the ‘60s and ‘70s. Nicolas P. Christy, MD, a professor of medicine at Columbia University, puts it another way: “Some day, there may be a naked human language in which thought and language are one; the bare thought will then be communicated pristine and intact. Then also, like the subjects of the naked Emperor, but for better reasons, we may as Andersen puts it: ‘praise the stuff we do not see’: the transparent stuff, the transparent dress through which we see the thought entire.” This in turn brings us back to our beginning: is there a dress code for everything? Aren’t we all weaved into a web  of archaic wishes and quests, dressed in nice shells waiting to be crushed? Who never dreamed of being that superhero, bad girl, pimp, bitch, megalomaniac, mega rich, and eternally viagra-fueled obelix-like super hunk? There are so many more characters on everybody’s mind. In we have ways to make you talk are a few things like this: the Eros drawing of Tiepolo, the last dance of Raymond Pettibon and his black flag punk band flyer in which Jim Morrison’s dick gets sucked off, or Larry Sultan’s photograph where one can see a roll of Kleenex thrown onto the floor of a porn movie stage, a quick reminder on the act, yet it is also much more as the show reveals. The exhibition takes place in a soon to be opened high-end fashion store that is nestled between the Burberry’s and Max Mara store of the Ku’damm strip—presently the store is under construction and bare-naked. [/spoiler] 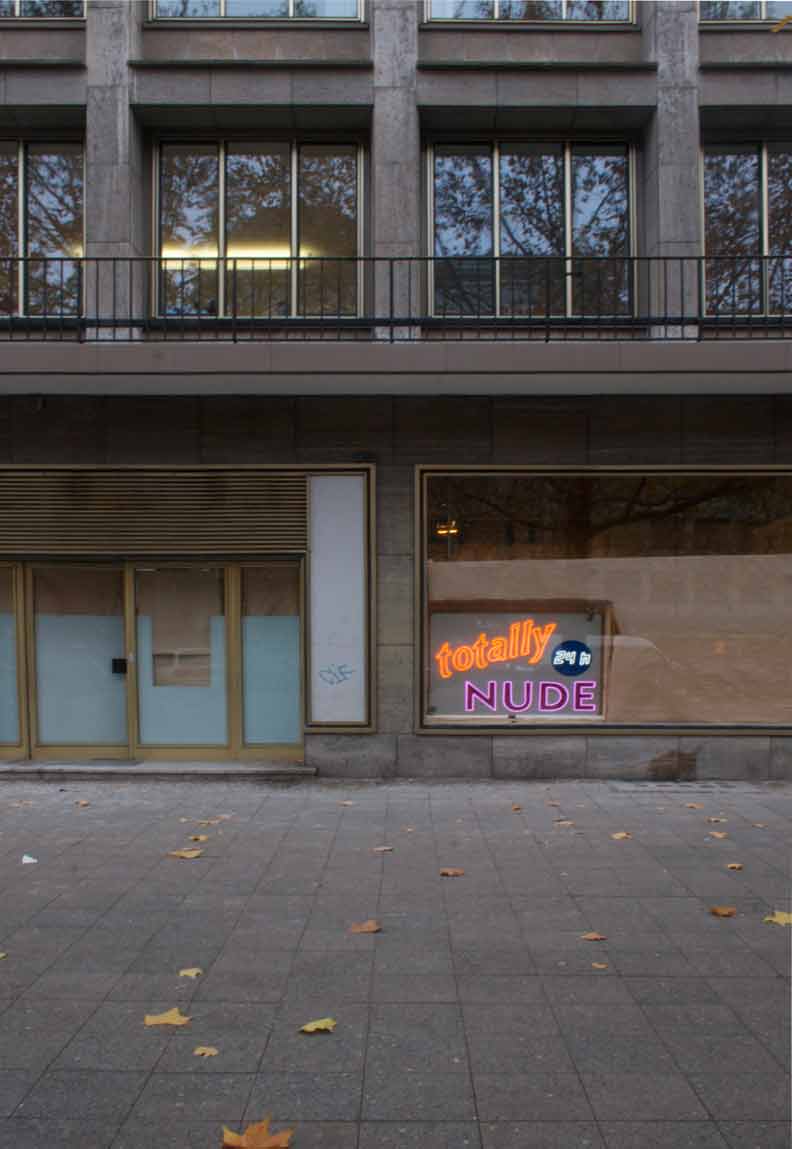 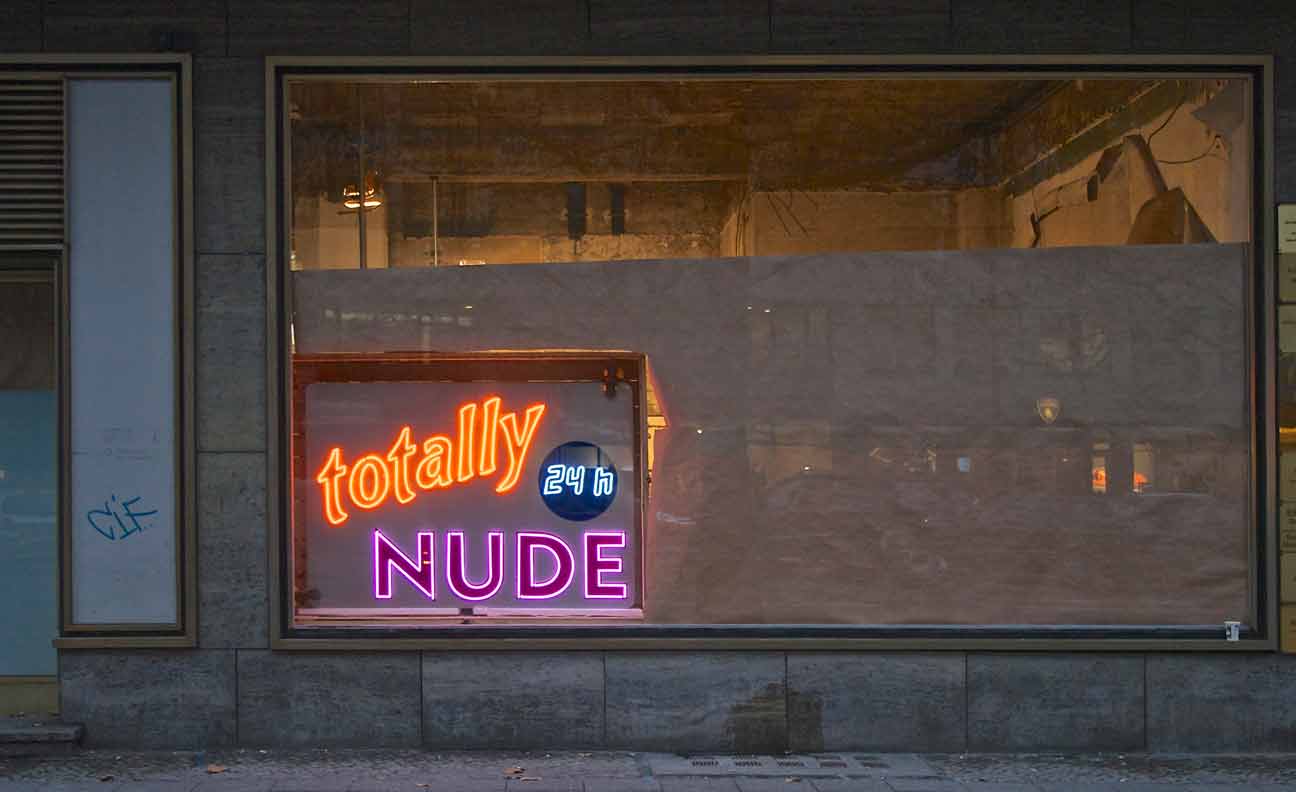 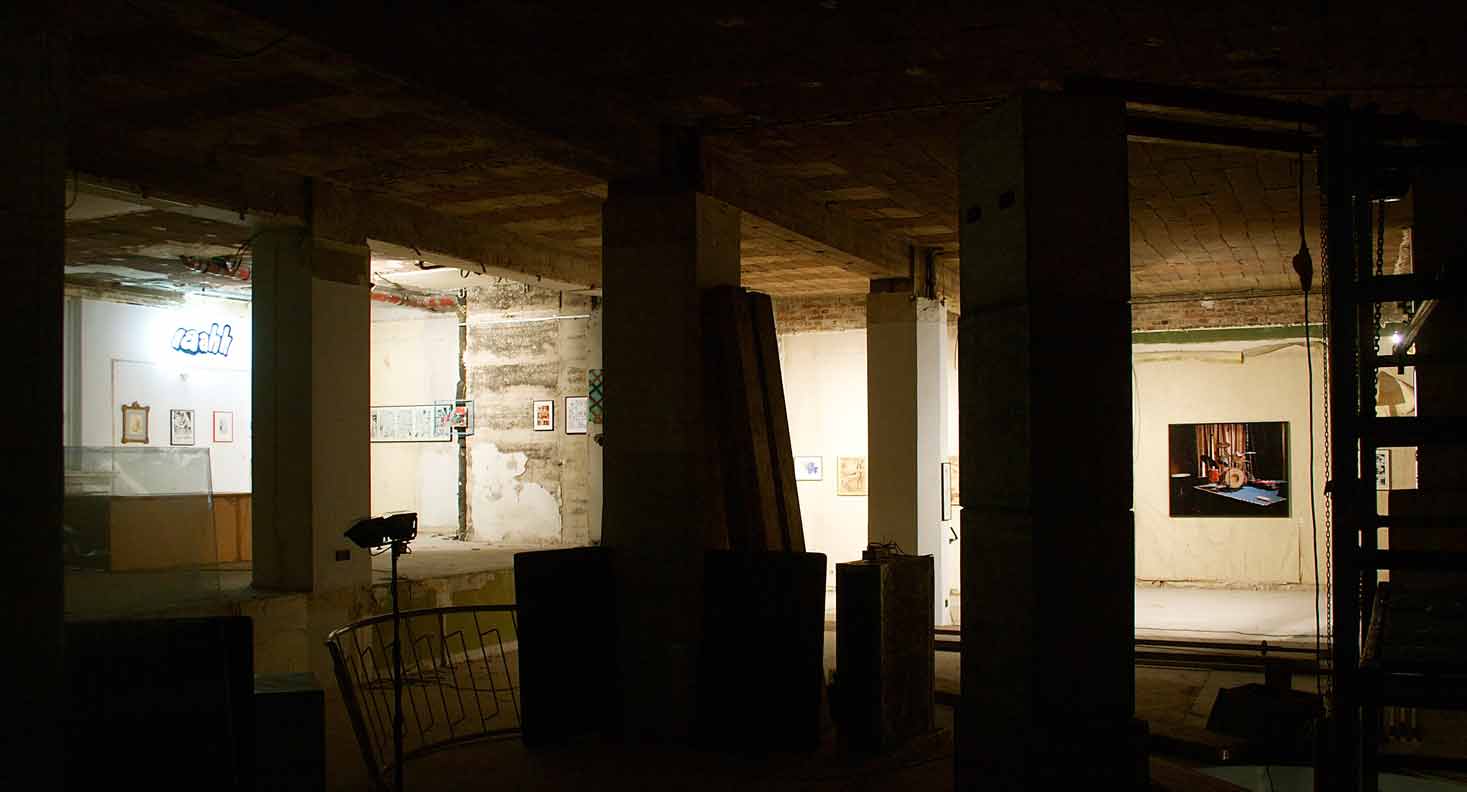 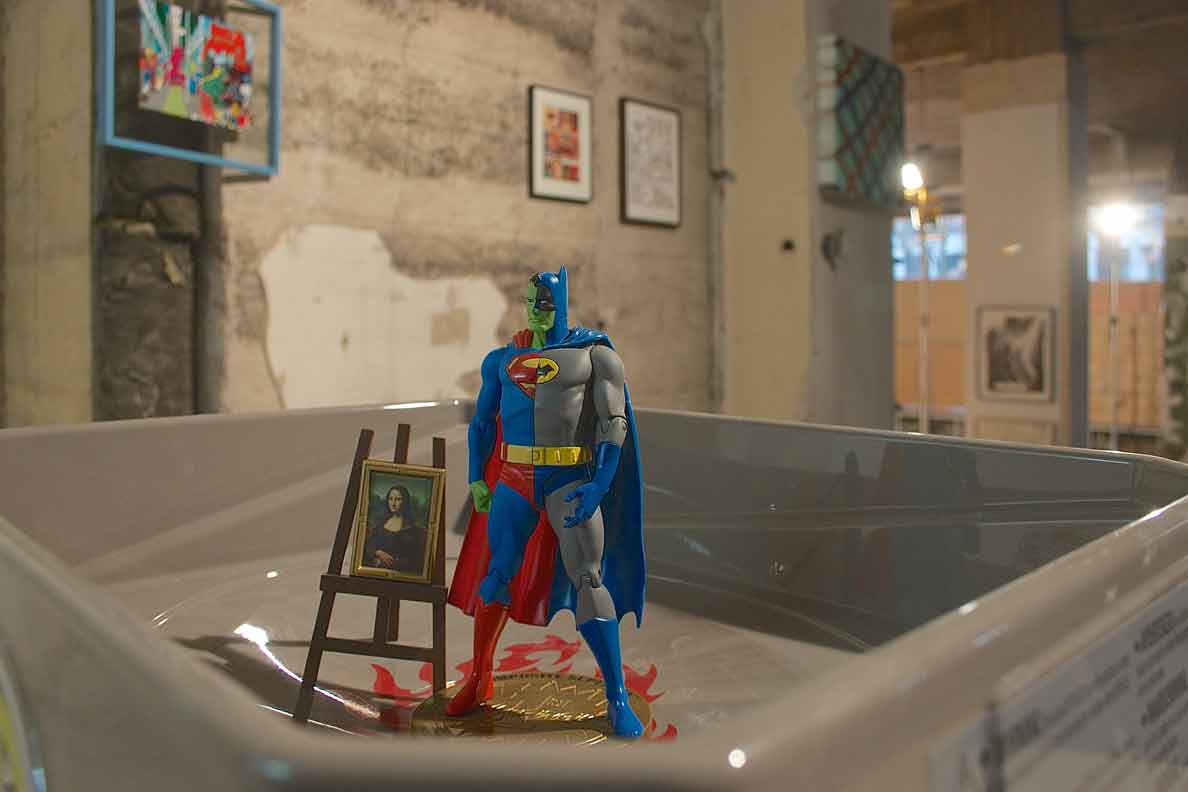 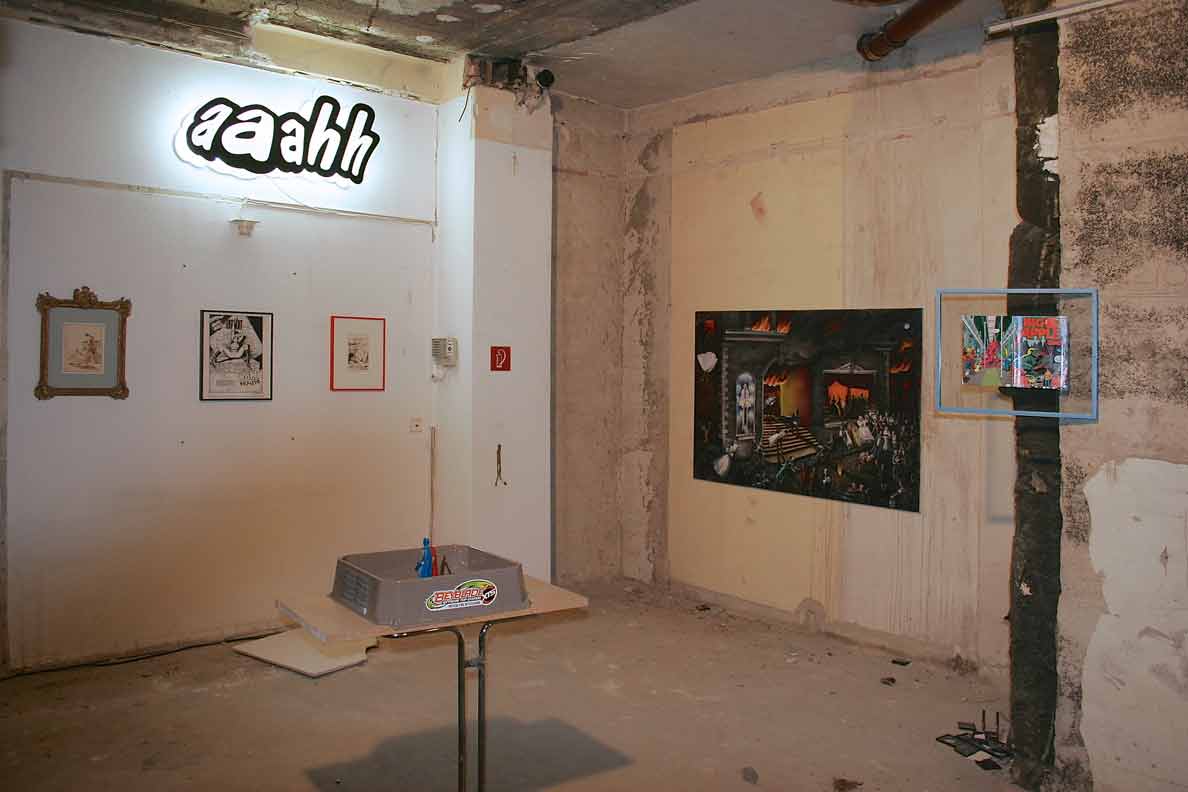 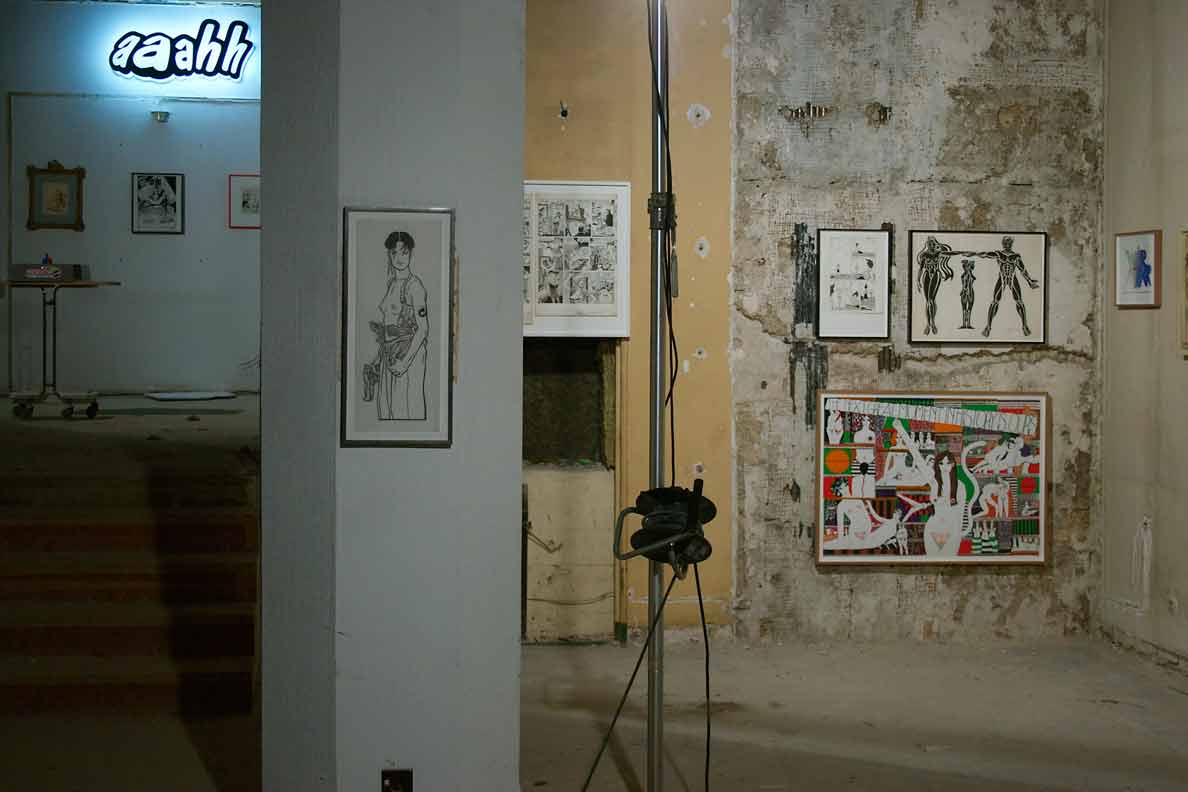 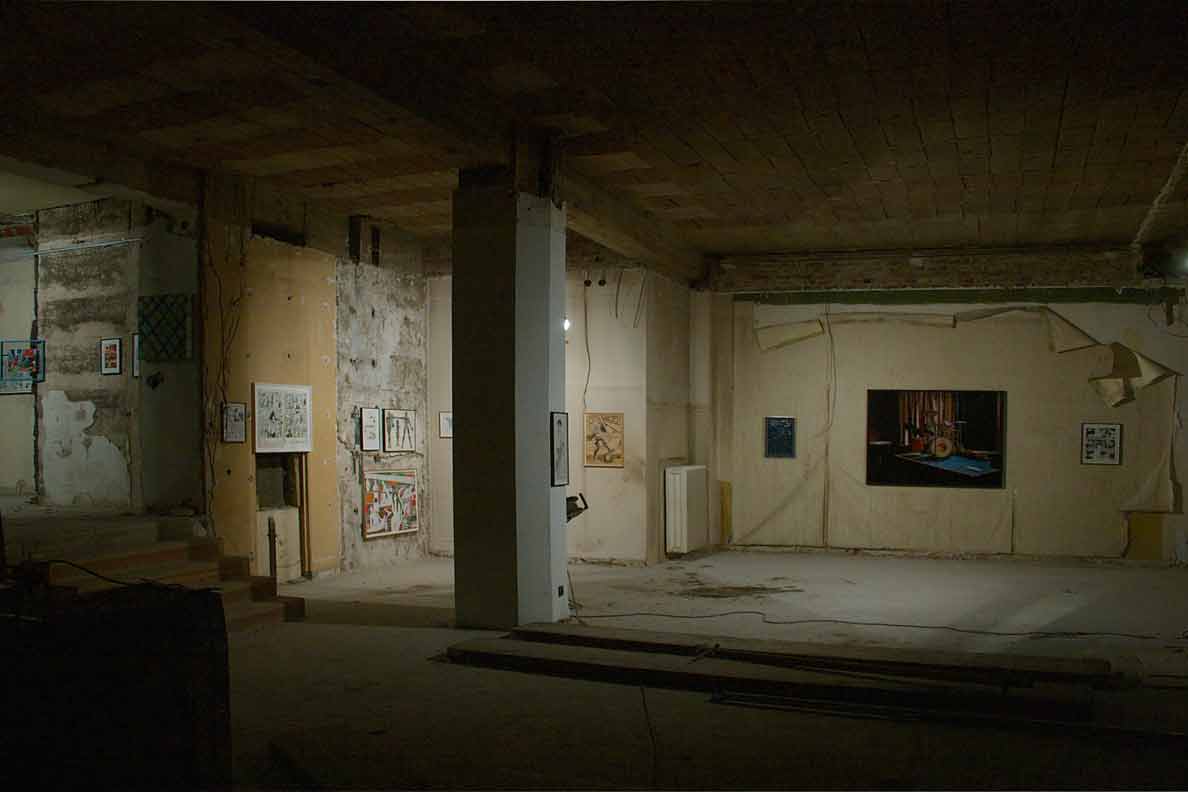 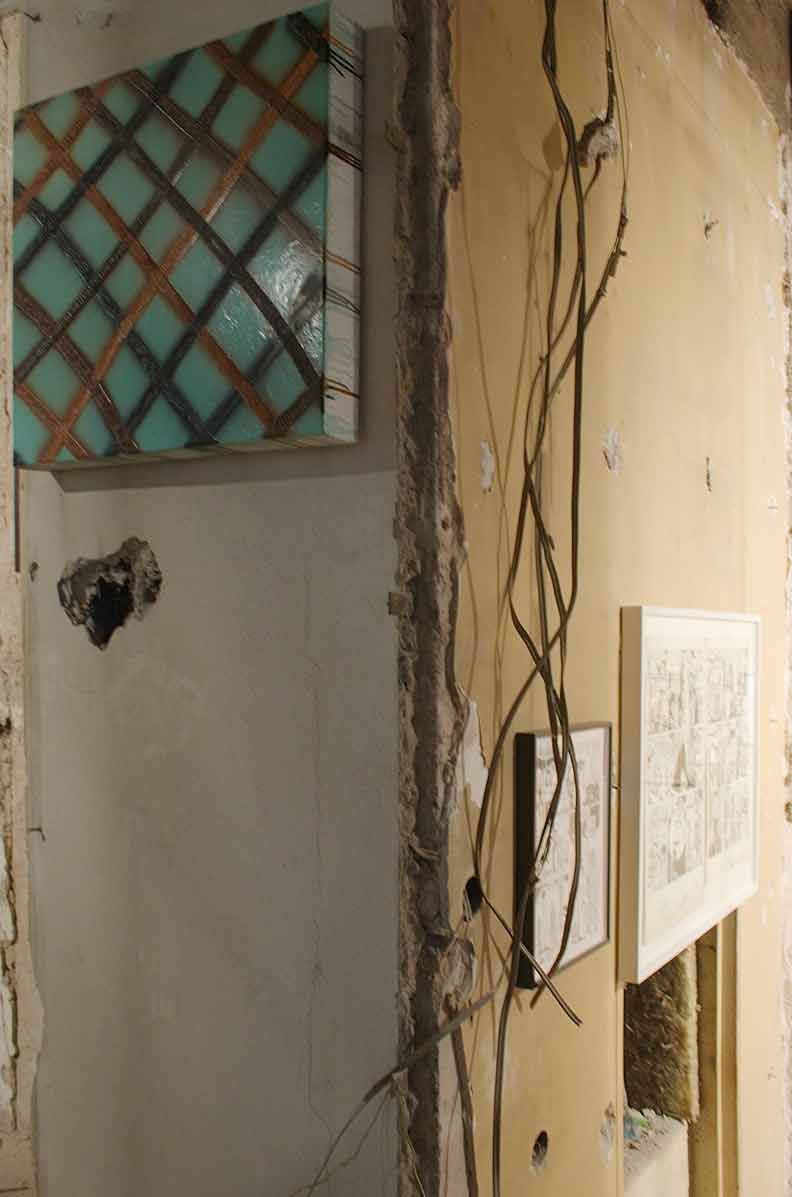 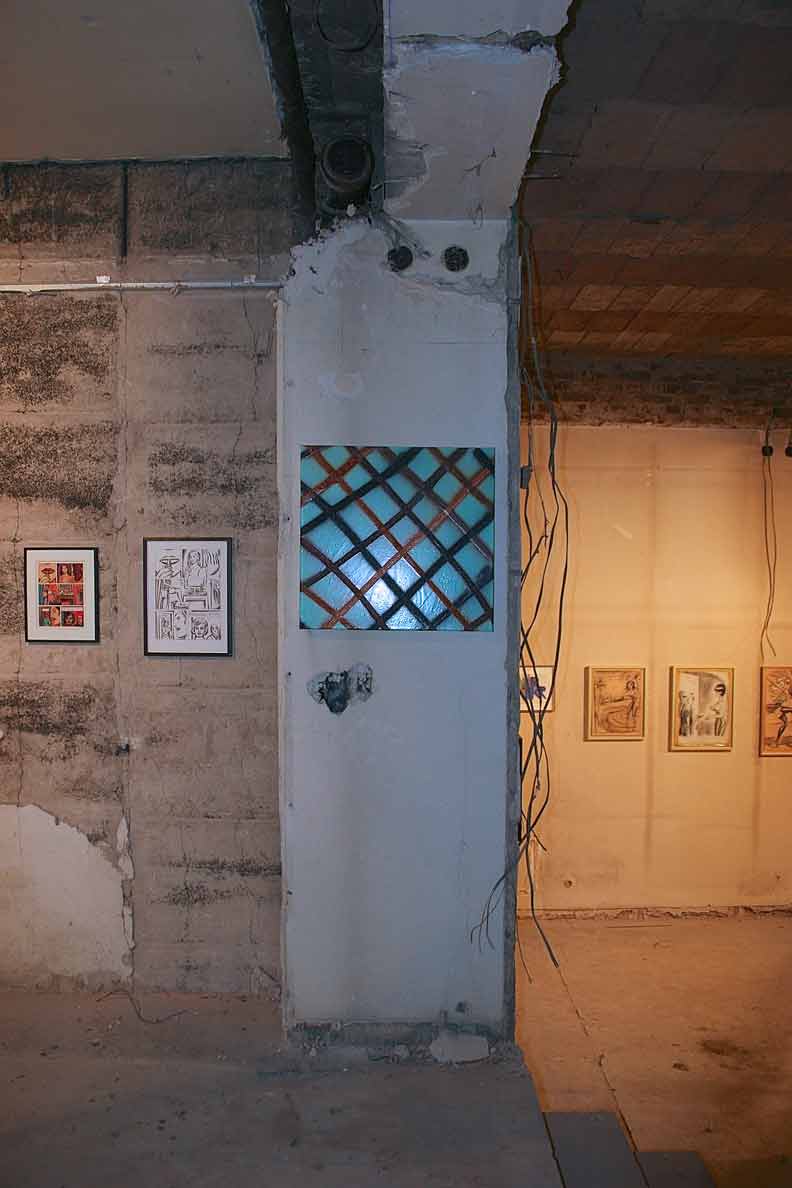 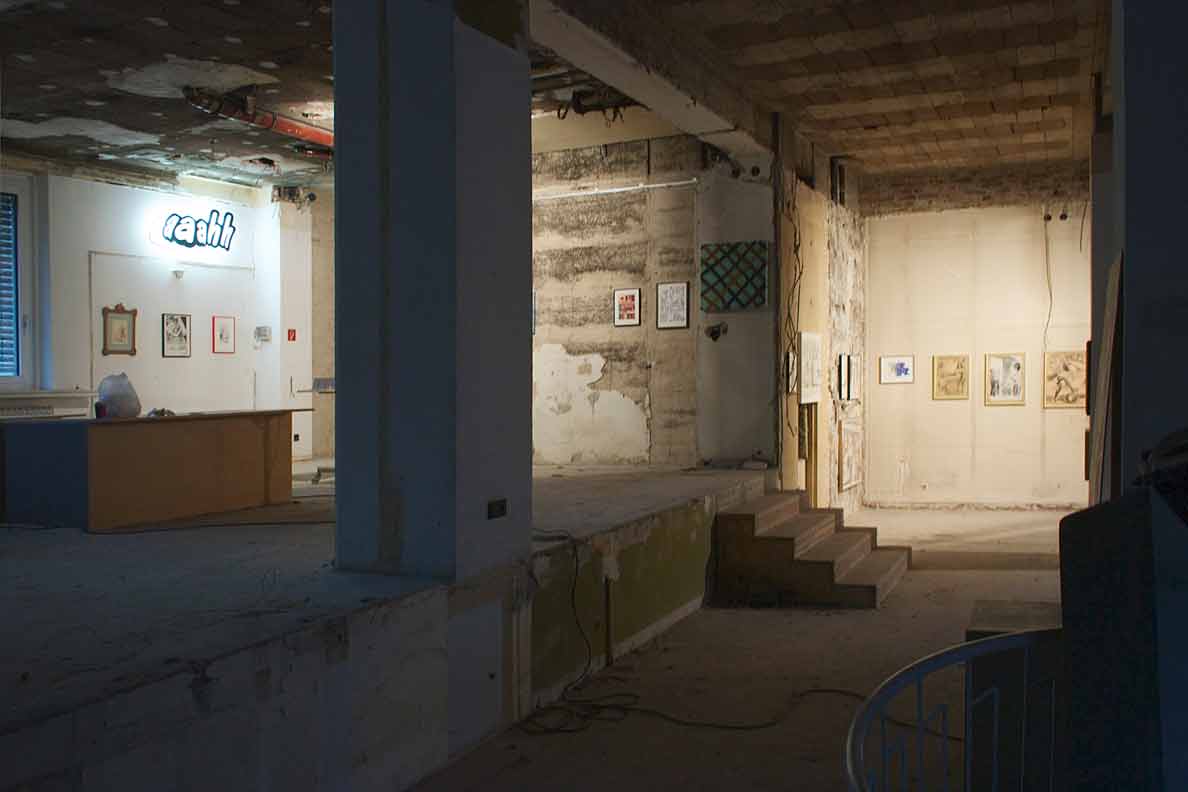 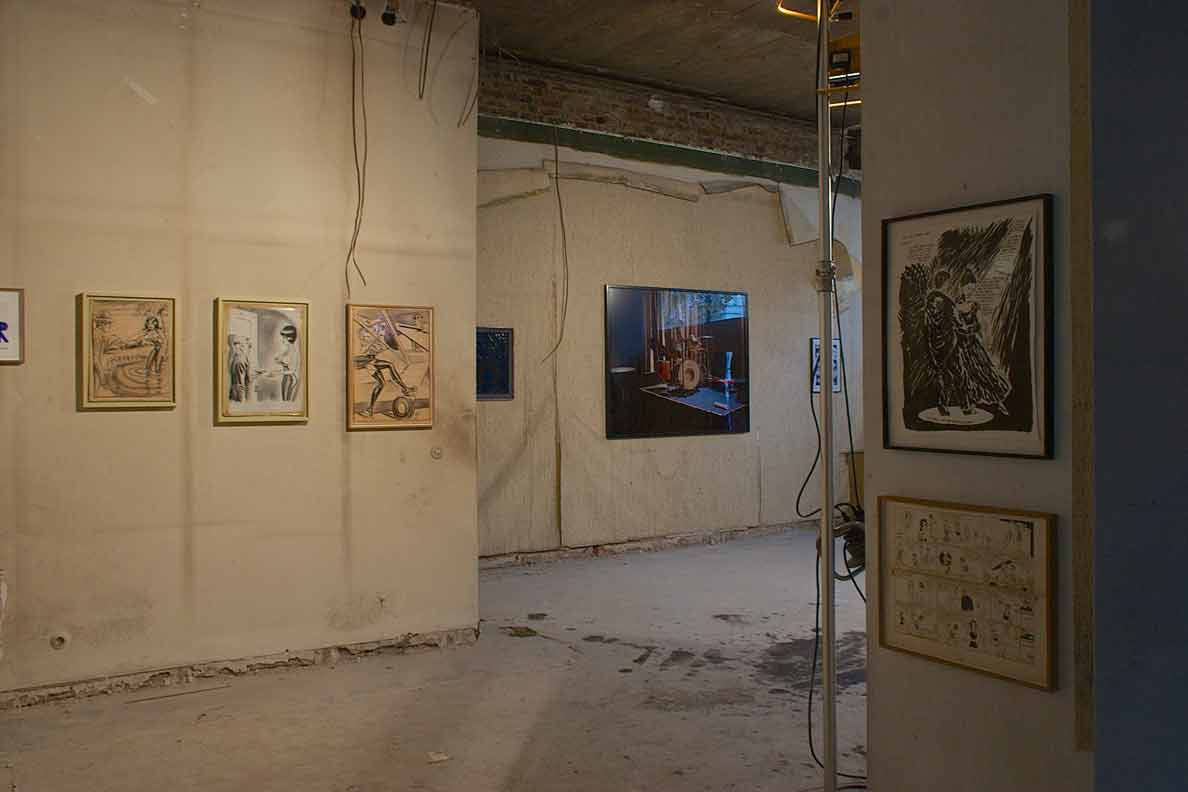 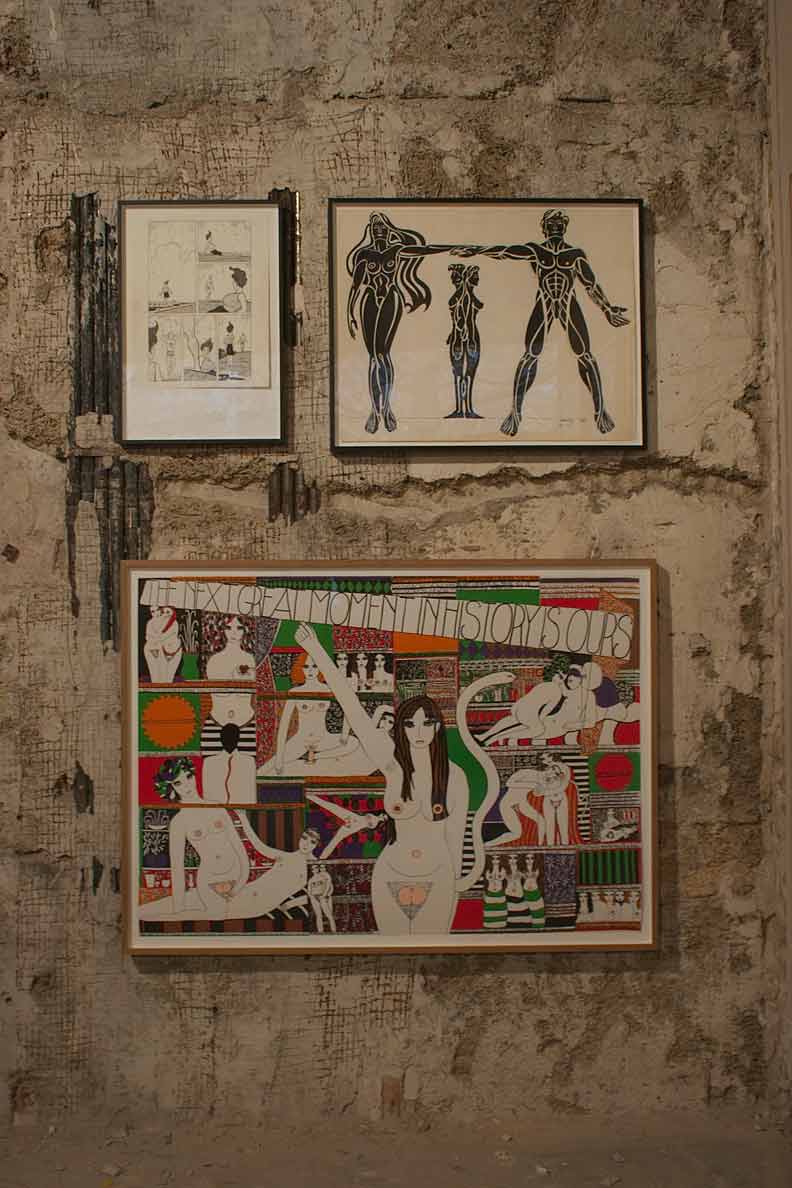 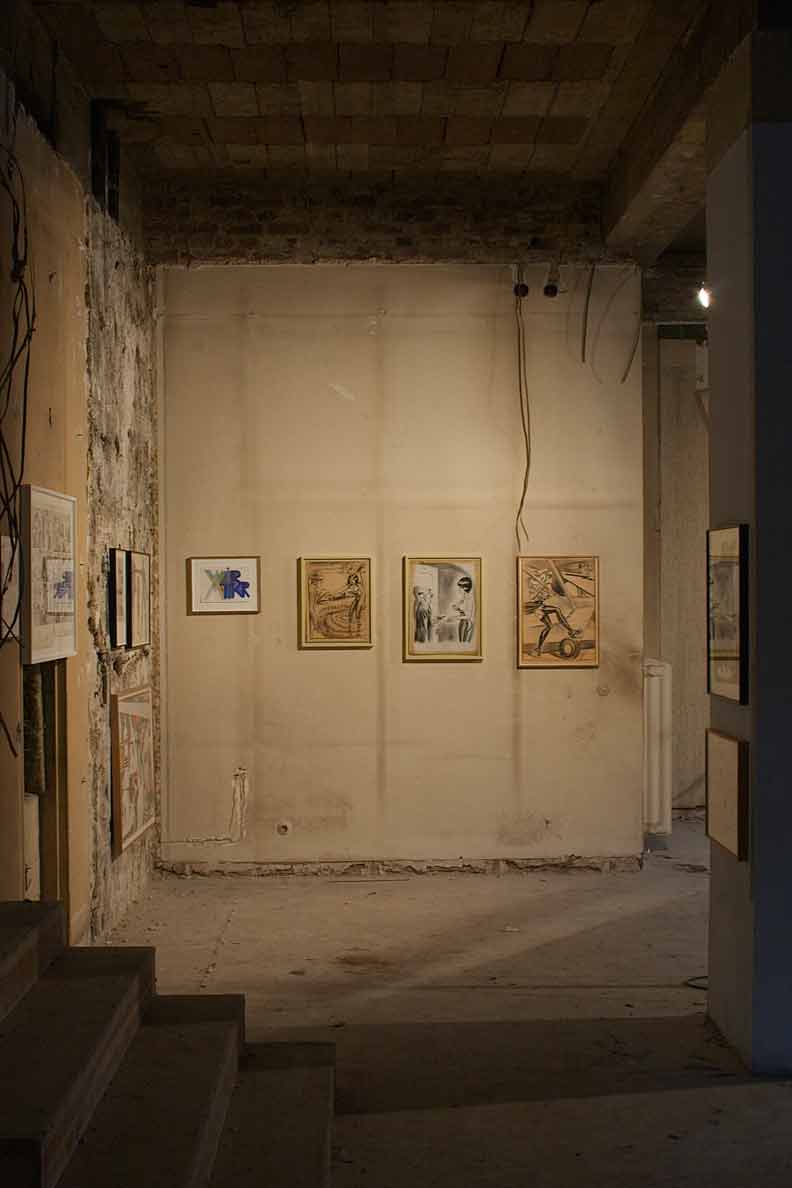 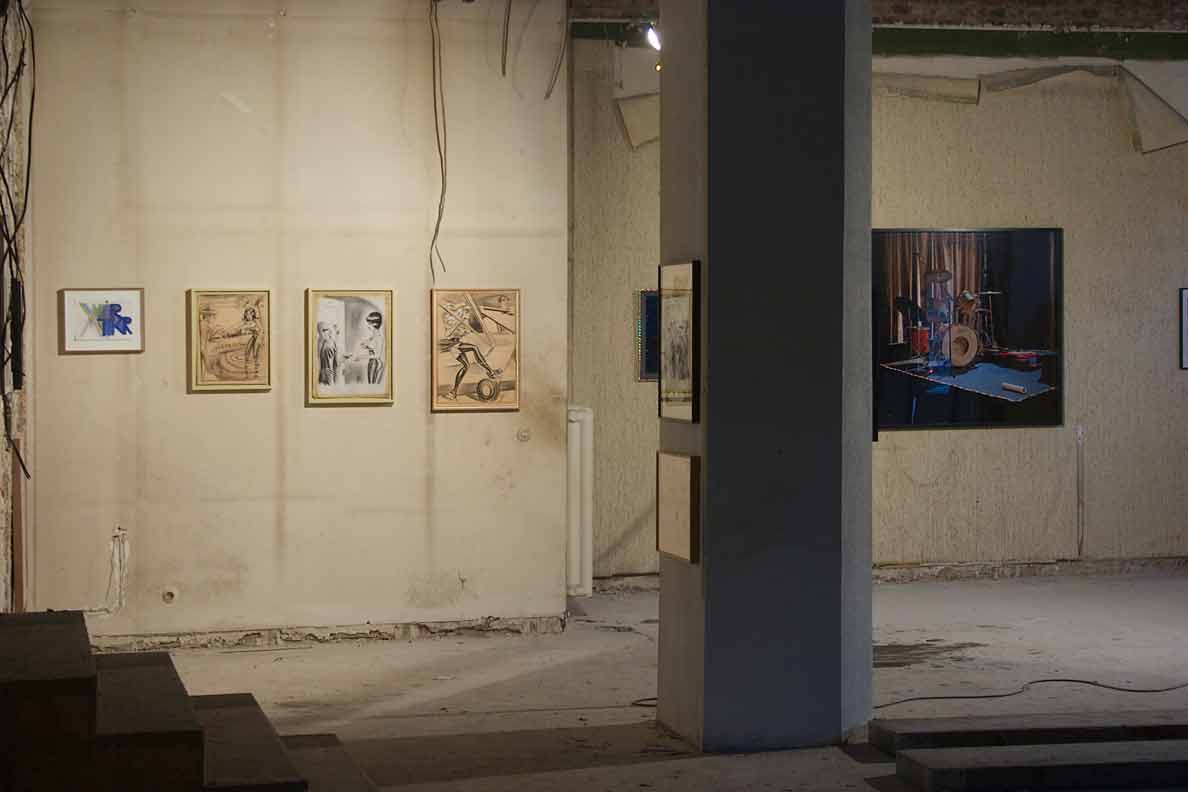 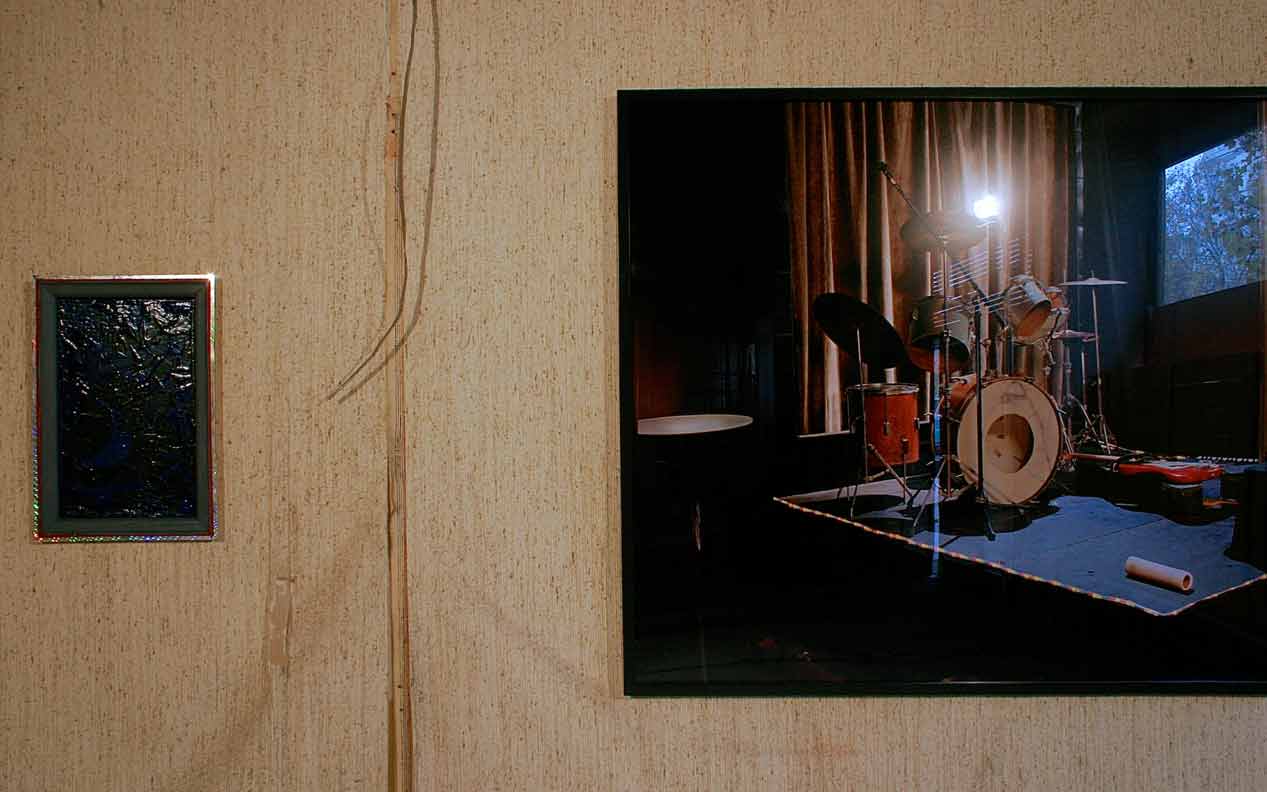 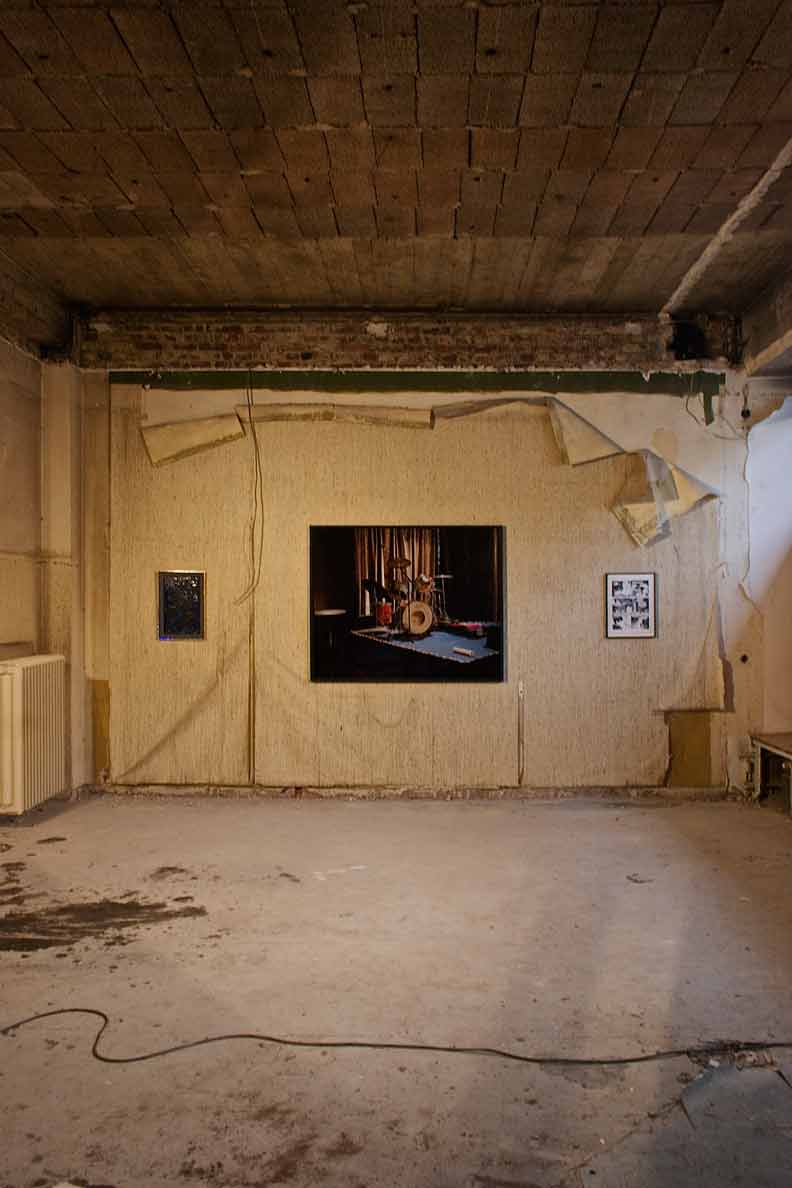 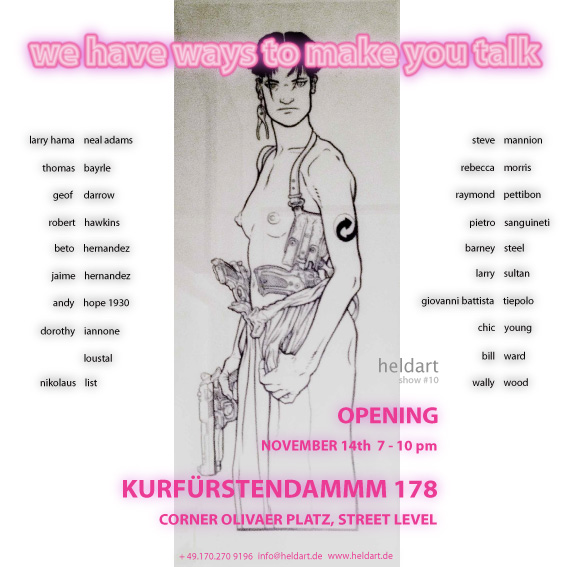